Handshake between Rose 150B and NAD m17v2i problems

These two devices are not playing well together. I have the Rose connected to HDMI 3 on the NAD pre/pro. The rose has been assigned source 4, and HDMI 3 has been assigned to that source. If I initiate playback on the Rose, there is no sound from my NAD / Parasound combination. If I cycle to another source and then back to source 4, only then I get sound, but only for that one song. I have to repeat the process whenever I queue up another song as the handshake is lost.

I find this mystifying.

This may be a related issue. But when I power up the NAD pre/pro, the Rose attempts to boot up also. This mystifies me. Is this a feature of HDMI? And the Rose does not boot up all the way. When this happens, the Rose is completely unresponsive to the touch screen or the bluetooth remote. I have to unplug the unit and plug it back in to get the unit to respond and boot up completely.

Why did you get the Rose RS150B? to listen to the NAD Dac?
If the sound should pass the Rose DAC use an output via RCA or XLR out (Analog).
All the other OUT are digital and bypass the Rose DAC (so the Rose is then just the streamer).
Have you configured the HDMI Port to fit your NAD?
At least HDMI Passthrough must be active in order to stream the sound as well.
I don’t use HDMI on the Rose so cannot say why this behaviour is like you have it. 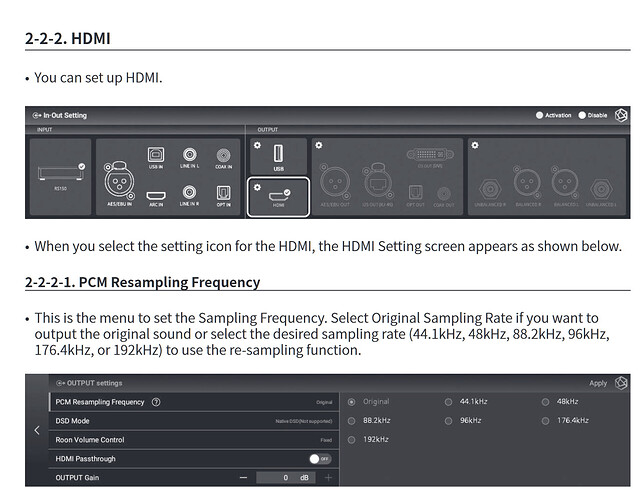 My goal for purchasing the HiFi Rose over an Aurender ACS 10 was to rip and store my extensive CD collection. My goal was not to listen to one DAC over another. My ears are just not that golden.

Thank you for your suggestions. However, I have the source on the NAD set up to the corresponding HDMI input that the Rose is plugged into. Also, I have the HDMI pass through enabled on the Rose. Again, I appreciate your input.

As I indicated in my original posting, if I manually cycle sources I can force a handshake and I get audio and video for that one song. And then the handshake is lost and has to be manually re-established again.

In addition to bringing up this problem, here, I emailed Rose tech support and I also contacted the vendor that convinced me that I should own a Rose over the Aurender, which has the built in CD-Ripper (I have ripping issues also - which I posted on this forum). My vendor (this is so cute) replied as follows:

"Why are you using the HDMI output, that is only for video. You would be getting much better results through balanced or single ended. "

Well thanks a lot. You, Mr. Vendor sold this to me saying that there was a plethora of ways I could connect this to my NAD including HDMI. Now that one of those schemes does not work, your reply:

‘HDMI is not optimal, use single ended’ - forces me to think of a 3 worded phrase that has the same first letters as Waste Treatment Facility.

This connection scheme should work, but does not. And I have not gotten a solution from anyone, I have reached out to. I feel like I am a beta tester of a $5000 device. I already beta tested Windows 95 and the Infiniti M-hybrid for free. If I am going to do development work, I want to get paid.

Update. On a whim, I decided to plug the rose 150B into HDMI 5 on the NAD. Perfect handshake. I unplugged, replugged, powered down, powered up all sorts of evolution on HDMI 5, the handshake has been pristine with each iteration. Could be an issue with the HDMI 3 socket. I have a query out to NAD. Could also be a flaky cable. More to come.

Blockquote
My goal for purchasing the HiFi Rose over an Aurender ACS 10 was to rip and store my extensive CD collection. My goal was not to listen to one DAC over another. My ears are just not that golden.
Blockquote

Not so sure about the HDMI. Thought output of the RS150 is ARC. Don’t know how that’s compatible with HMDI. Am not an expert in HDMI.

Thank you for your opinion, judging but not surprisingly, insight free. Take care.